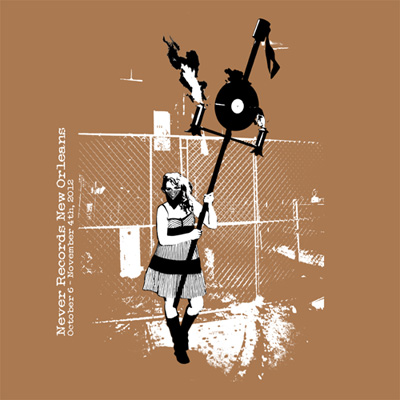 The New Orleans Never Records was an idea in search of a venue for many months.  Finally, at the right time, the tenants of an old gallery space decided to move on, and owner Jonathan Ferrara had an empty space on his hands: one block off the streetcar line, big storefront windows, and no rules. The shop featured a single room format where anyone could drop in and watch the recording process, a small living room arrangement where people could talk music, dish dirt, or catch z’s.  The lathe went into overdrive again, and the shop ran out of vinyl blanks well before the month-long lease was up.

In a city full of working musicians working regular gigs, songs shift casually between the over-rehearsed to the intimately improvised.  Music is everywhere, often loud but under heard.  The motto You Are Not Listening can be a way of life when you are up against the constant demand for what was promised in the advertisements of this often misunderstood city.  But being a punk in a jazz town just means you know your instrument a little better and that the man standing behind you in line at the food truck wearing a tutu and carrying a clarinet case has just as much F.U. in him as you do.  Once inside the doors at Never Records, though, the waxy buildup of genre prejudice was buffed out and attention was truly paid to detail.  Sessions often continued unofficially on the sidewalk outside the shop, comprised of temporary matchups of hangaround players awaiting the by and by.

LittleMaker from Jason Wyche on Vimeo.