Ted Riederer’s art makes him part of strangers’ intimate moments for three hours at a time. But he’s not so much a voyeur as a cultural witness.

He records people on vinyl, doing or saying whatever they’d like, for free. Over the years, he’s recorded amateur and professional musicians, people talking in person and over the phone, and even skateboarders riding around whatever space he's using.

For the last couple of months, he’s been working out of a storefront in the East Crossroads as part of Kansas City’s Open Spaces arts festival.

“There’s this beautiful, transcendental science to (the recording process) that I think makes it even more beguiling where all a groove on a record is is soundwaves etched by a diamond,” he told Gina Kaufmann on KCUR’s Central Standard.

Musicians Jenna and Martin wrote and recorded a song about caring for Jenna's elderly grandmother in the town of Peculiar, Missouri. Ted Riederer has preserved the song on vinyl.

“I’m hoping to re-enchant the world if only for a second, and allude to all these other possibilities, like: If a diamond can etch sound into an object, what else can happen in our natural world?” 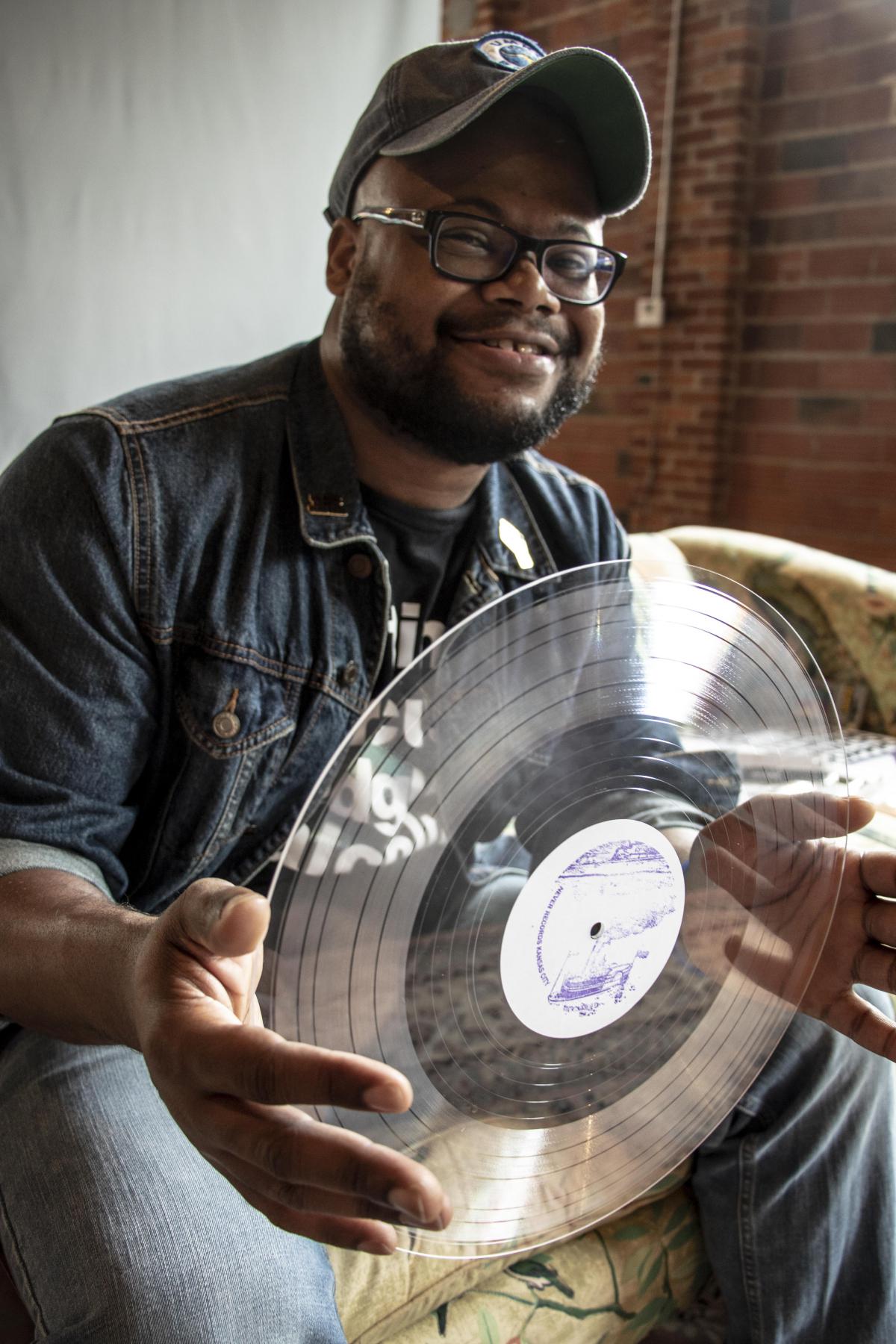 Riederer calls his travelling studio an art installation or performance art project. In addition to recording his guests, he also shows them how to cut a record.

“I’m showing them the transcendental science of cutting, which is a diamond vibrating the sound waves etching sound on an object forever. To participate with people through that process, I feel very close to them. And also that people are giving their best to me, it’s a real honor,” he said.

The project is not music-oriented. Instead, he said, it’s about encapsulating moments. For instance, during his time in Kansas City, Riederer has stayed near a Mexican restaurant, Los Alamos, that he came to love. He wanted to give the proprietors a gift, so he recorded the father and the son.

“In making this process with Benny and his dad, they communicated things to each other that they might not have been able to say in person to each other, and it was really wonderful to watch, so I blended their voices together in kind of a dialogue which they might not get to have,” Riederer explained.

Ted Riederer recorded Benny (son) and Augustin (father) who own the Mexican grocery and diner, Los Alamos. After speaking to them separately, Riederer edited their voices into one recording as if they were speaking to each other.

The dialogue Riederer mixed and cut into vinyl will survive and be playable as long as the physical object that is the record stays intact. He says vinyl is still the most stable medium to record on.

And because of vinyl’s relative permanence, anything recorded becomes an audio time capsule.

Since he began touring in 2010, he’s been to nine cities including one in Jordan. Each city has its own set of sounds, and each city’s sound adds to a larger collection of the culture, or even humanity, as a whole. He calls it “the global song.”

Riederer, an artist and composer, says he hit on the idea after moving from Boston back to his native New York City in 2004 and discovering that he no longer had time or money to make the art he wished to.

His research into portable recording-cutting equipment led him to a company run out of a barn in Southern Germany. The team of engineers who created the “vinyl recorder” he wanted to purchase insisted that he do so in person.

“It was sort of a leap of faith or a pilgrimage,” he said, not unlike it is for those who walk into one of his temporary studios to bare their souls. 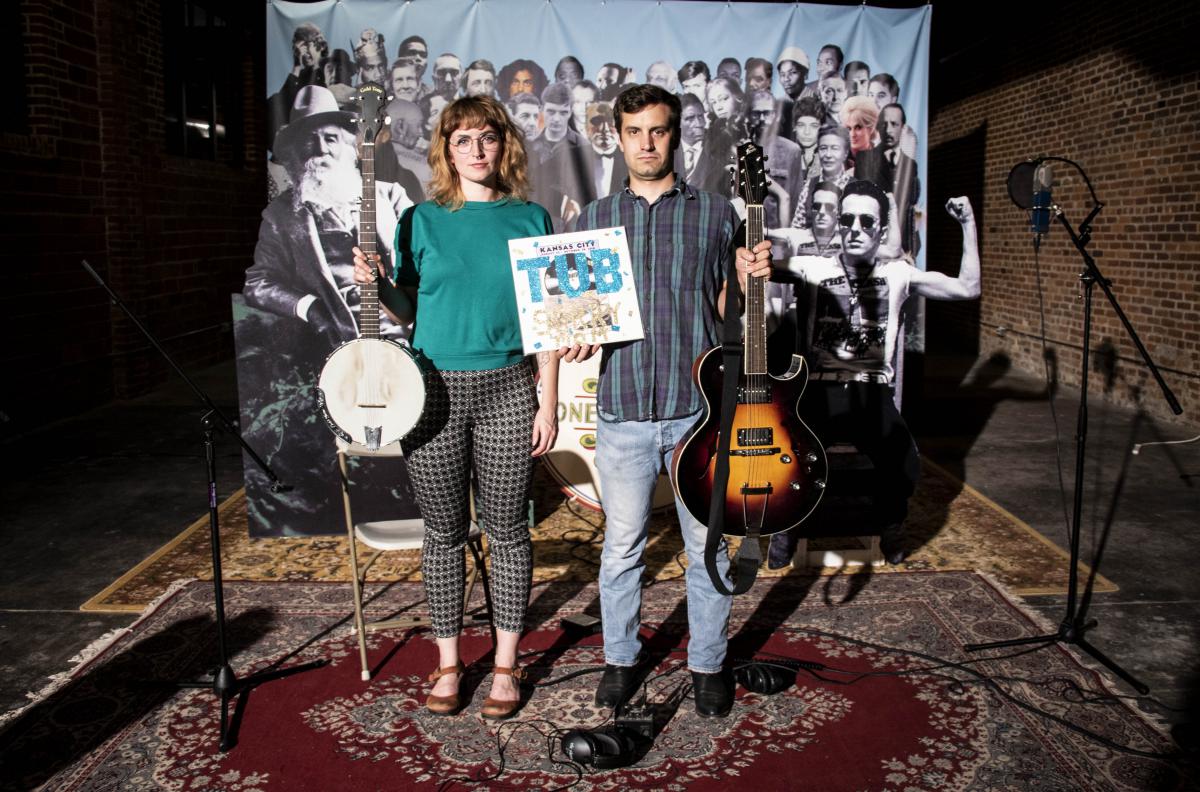 Performers TUB recorded with Never Records this fall at the East Crossroads space.

Making the transaction money-free remains vital to the project as a whole, because he thinks of art as trafficking in a gift economy. He goes so far as to say that monetizing something is the same as weaponizing it. When he tells those who book sessions with him that no money will ever be involved with his label, Never Records, they’re able to produce a higher quality performance.

“The idea is that by coming together in a space that’s free of the overt professional considerations of say money or fame, that you essentially get a community center that’s almost like a secular church,” he said. “If you take money and fame out of the art game, you get this beautiful space.”

His sessions are booked for the remainder of his time here; anyone who’d like a record made will have to catch him in another city down the road. He’ll be in Brooklyn in 2020 and most likely Madras, India, after that.