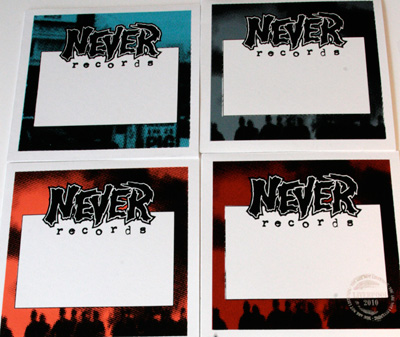 No Longer Empty and T.A.O.(The Art Organization) present The Sound of Art
At The Liverpool Biennial
Curated by Asher Remy-Toledo and Andrew Ellis
Special thanks to Gregory Scott Gurner, Stefan Kazassoglou, Binary Cell, The Kazimier

Never Records was offered the chance to build its own full-service shop for Liverpool’s Biennial Contemporary Art Festival following the success of the No Longer Empty project.  As usual, money complicated matters, but the chance to transform Never Records from a bullet point on a resume into a real cultural experiment was too good to pass up.  After scrounging up some funds from friends and supporters, Ted traveled to Europe, first driving into the remote countryside of Germany to negotiate the sale of a lathe from some eccentric former jukebox repairmen turned small batch manufacturers.  In Liverpool the crates were unpacked, the bins were assembled, and the store was open for business.

The Liverpool shop sat like a TV set inside of the black soundstage atmosphere of a cast-off nightclub and the long silent walls once again reverberated with live music captured for the first time through the Never Records lathe and cut to clear vinyl.  The original plan was to fill the bins with copies of recordings of curated performances, but that script got shredded after the first week, and the door was opened to all comers.  At the expense of sleep and sanity, the Never Records archive started to grow exponentially.  News spread like a hot nerve through the city’s network of musicians, and this port city--whose musical heritage and diversity comes in part from the international records British sailors brought home with them after their travels--got to do some exporting of their own signature sounds.